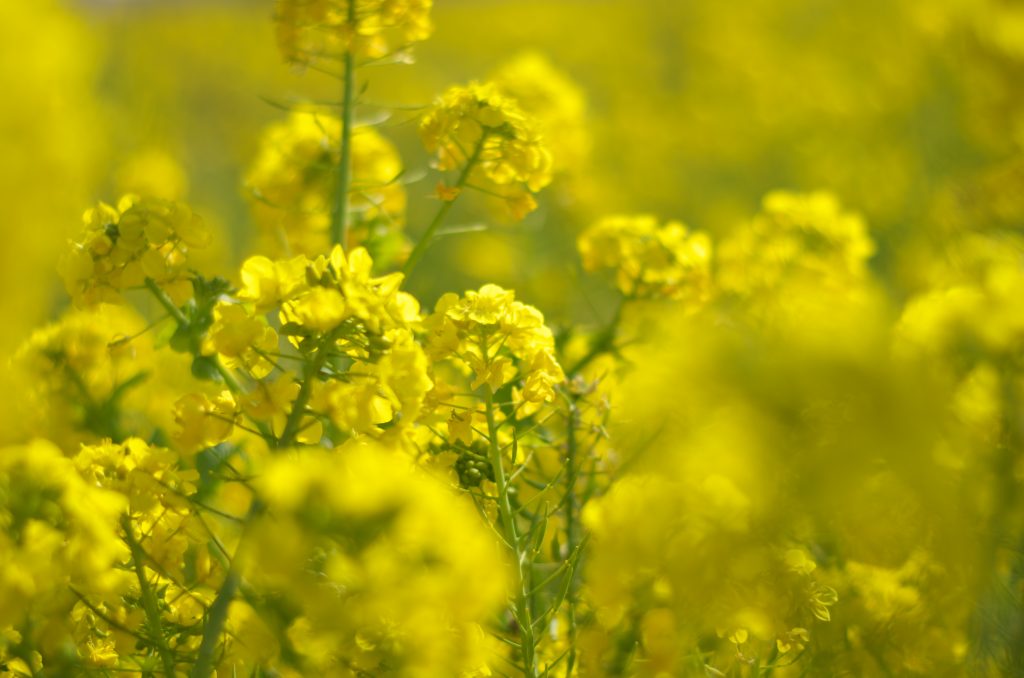 Near the end of World War II, the oil derived from Field Mustard (Brassica rapa) and Rapeseed (Brassica napus) was in demand as a lubricant to run steam powered trains and ships smoothly. For this reason, Canada began cultivating rapeseed to provide a better lubricant supply chain. However, after the war ended, and with the introduction of diesel-run engines, the future of rapeseed cultivation was unknown. Fortunately, scientists realized the potential of rapeseed oil for cooking purposes. In 1968, Canadian plant breeders began to produce “Canola” oil, which was a portmanteau of “Can” for Canada and “OLA” for Oil Low Acid and released the first low erucic acid variety named “Oro”. After extensive breeding, the “Canola” brand was considered as a standard of healthy edible oil.

Canola is now one of the most valuable crops for Canadian farmers and generates 25% of all national farm cash receipts. In numbers, it contributes $26.7 billion annually to the Canadian economy, provides some 250,000 jobs and $12.5 billion in wages. Not surprisingly, it is a favorite among health-conscious consumers as Canola oil has high levels of monounsaturated and polyunsaturated fatty acids. The oil is also light and tasty, making it the oil of choice for many chefs and the food processing industry. After being crushed for its oil, the remaining seed provides a high protein feed supplement for animals. As the world’s need for healthy oil continues to rise, global demand over the next decade is expected to require a 40 percent increase in Canadian Canola production. Exports are already worth nearly $9.3 billion annually.

“Clearly, any measures that make Canola seeds produce more and higher quality oil and meal will have a large payoff for Canadian farmers and processors.”  CUC Project, Genome Canada

The Genus “Brassica” belongs to the flowering plant family Brassicaceae. Diverse types of Brassica have incredible economic importance worldwide by providing vegetable oil for human consumption, food for animals, and vegetables. Among the different species of Brassica, three allotetraploids and three diploids species are particularly important for agricultural production.

Brassica napus (AACC, 2n=38) is an amphidiploid species derived from interspecific crosses between B. oleracea (CC, 2n=18) and B. rapa (AA, 2n=20). The interrelationship among these species is known as the ‘Triangle of U’ (U, 1935). The two diploid parental species of B. napus carry morphological and genetic diversity. Thus, the two-progenitor species can be used for broadening the genetic diversity in spring oilseed B. napus. Polyploidy has contributed substantially to the diversification of seed plants. Allopolyploids such as canola are formed by the hybridization of two or more closely related species, primarily by fertilization of two unreduced gametes or, to a lesser extent, by genome doubling after fertilization of two reduced gametes.

The development of oilseeds such as canola, relies on the identification of the genomic region linked with trait expression. Identifying and characterizing the genes and genomic regions, controlling economically important traits in canola, are of critical importance to the canola seed industry, therefore it invests heavily in canola molecular breeding programs. However, the development of breeding populations is lacking the characterization and implementation of quantitative traits associated with complex trait’s parameters. Thus, the development of genomic tools associated with these economically important complex traits holds significant value for canola growers in Canada and around the world. To address these challenges, there is a demand for state-of-the-art next generation genome sequencing, bioinformatics, and breeding strategies to identify haplotype sequence variation through the canola pan-genome and to use such variants for genomic selections of complex traits.

Over the last decades, extensive advancements have occurred in genomics and molecular breeding of Brassica species. The utilization of molecular markers in marker-assisted breeding, transformations for the introduction of attractive traits and analysis of these attributes are now imperative parts of the research. This original objective was later linked to the exploitation of a wild specie for introgression of the genomic region for desirable traits. During the variety development of Brassica crops, trait introgression from wild contributor specie was a noteworthy approach to introduce valuable genes and traits. Wild Brassica species possess a number of useful agronomic traits and are widely used in plant breeding programs to broaden the genetic base. They have also been used as sources of donor elite alleles, controlling economically important quantitative traits including crop production, disease and pest resistance, tolerance to abiotic stresses (cold, salt and drought conditions), and specialty components of quality attributes (seed oil or glucosinolates).

Undoubtedly, the use of genomics will significantly increase in the future. The recent development of techniques to evaluate genomic level diversity has increased the available variation for selection. Whole genome SNP markers based tools can improve selection efficiency of phenotype based traits, and also traits which phenotypes provide little information about the underlying genes. Rapid genetic progress will occur based on our ability to precisely target key traits, and to identify and locate gene sequences controlling agronomical important traits. Identification of appropriate parents and efficient selection of progeny in early generations will become easier once a key trait is targeted and we understand the diversity of the germplasm. Recent cutting-edge technologies can certainly answer the ultimate aim of the Canola Council of Canada, which is to achieve an average yield of 52 bushels per acre to meet global market demand of 26 million metric tonnes by 2025.

To learn more about the canola Pan-genome project, join our next webinar:  Register here

Head of Genomics, Accomplished research scientist leader with 18 years of international experience in agriculture product development, technology deployment, project management, talent development and negotiation of public-private partnerships. Over the years he has structured and worked on many public-private partnership projects with several international and Canadian institutes. Masood has served as an invited speaker and panelist in many agribusiness forums and has over 50 peer-reviewed publications and four patents families on which he is an inventor.

Previous Blog:
GUAYULE – AN ALTERNATIVE Next Blog:
SYNTHETIC BIOLOGY: BREEDING BY
Back to blog