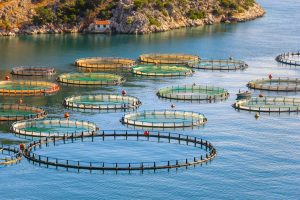 Archaeological evidence has established that aquaculture is a practice thousands of years old, with the Australian New South Wales Department of Primary Industries claiming that the Aboriginal peoples carried out aquaculture as far back as 40,000 years ago. Thus, it is perhaps surprising to learn that aquaculture is considered to be the relatively young sector in the agriculture world after plant and animal farming.

However, aquaculture is presently the fastest growing food-producing sector in the world, contributing one-third of global food fish production. Population growth, healthier diets, a movement away from meat consumption, and increased income and wealth, have all contributed to the rise in seafood consumption (see Fig. 1).

Aquaculture has significant potential to provide an alternative and sustainable protein source for future populations.  The nutritional benefits of fish consumption show a positive correlation with increased food security and decreased poverty rates in developing countries.

In the early 1990s, the fish capture industry plateaued due to the decline in natural fish stocks and the fear of depleting the ocean of marine life. The limitation to extract more seafood from the oceans thus became a driver needed to promote aquaculture production. Farmed seafood is expected to become a primary food supplier to the market due to ever-rising demand, while offering an alternative and eco-efficient protein source that will help conserve wild fish stocks.

When compared to other forms of protein production such as agriculture, aquaculture is intrinsically more sustainable with a much lower environmental impact and resource use. Aquaculture is also much more efficient in converting feed into edible protein (Fig. 2). However, aquaculture production must grow substantially to meet the growing demands for protein and thus extensive changes (speed and scale) are required.

The rising demand led companies and research groups to follow in the footsteps of plant and animal agriculture and implement new tools to advance traditional breeding into the molecular breeding era. Innovation, technological advancements, and manufacturing technology (not covered in this blog) allowed the aquaculture industry to up-scale, and over the last 20 years, biotechnology and breeding became strongly incorporated into aquaculture.

Biotechnology can identify and combine traits to increase productivity and improve the quality of fish and shellfish. Scientists search for genes that can increase both the production of natural fish growth factors as well as the natural defense compounds marine organisms use to fight microbial infections.

Genetic manipulation (GM) was the main approach for altering genes at the genomic level. The first product to be approved was genetically manipulated salmon. In these salmon varieties, the gene for growth hormones was duplicated, causing an amazing 10-30% increase in growth rate and a reduction in growth time by 50%. Other GM fish were created with disease resistance and improved quality traits. The future of biotechnology applications in aquaculture will include the adoption of the CRISPR/CA9 gene-editing technology. For this to take place, high-resolution assembled genomes are required in addition to scientific research to reveal beneficial changes in the genome of the targeted organism.

Unlike GM, systematic and efficient breeding programs to improve economically important traits in farmed species, were rarely utilized until the last decade. Therefore, the majority of aquaculture production was based on genetically unimproved stocks. In farm animals, the situation is vastly different, namely that practically all terrestrial farm production is based on genetically improved and domesticated populations. This essential difference exists between aquaculture and livestock production in spite of the fact that the basic elements of the breeding theory are the same for fish and shellfish as for farm animals. That said, in the last 20 years, efficient breeding programs were implemented that helped close the gap. Below are the main selective breeding methods used:

The genetic improvement obtained in selective breeding programs for fish and shellfish is remarkable and much higher than what has been achieved so far in terrestrial farm animals.

Looking at the future of aquaculture, the industry faces challenges and opportunities:

By 2030, about 66% of seafood is predicted to come from aquaculture. Production and selective breeding will become one of the main engines of future growth. On top of traditional breeding methods, companies like NRGene can use its experience and computational abilities to help our partners conduct better breeding through finding genetic markers, improving the accuracy of their genotyping process, reducing the associated costs, and developing and implementing prediction algorithms for improved genetic gain.

Ben is a Genomic solutions expert at NRGene. He holds a PhD in molecular genetics from the Weismann Institute of Science and MBA (biomedical program) from the Collage of Management, as well as a BSc in agronomy from Hebrew University of Jerusalem. He has been working in the Ag/biotech computational biology industry for 10 years and has been practicing agriculture his entire adult life.

Previous Blog:
TOWARDS A SUSTAINABLE SOLUTION Next Blog:
BREEDING FOR PROTEIN –
Back to blog