TOWARDS A SUSTAINABLE SOLUTION TO INCREASE SUNFLOWER YIELDS 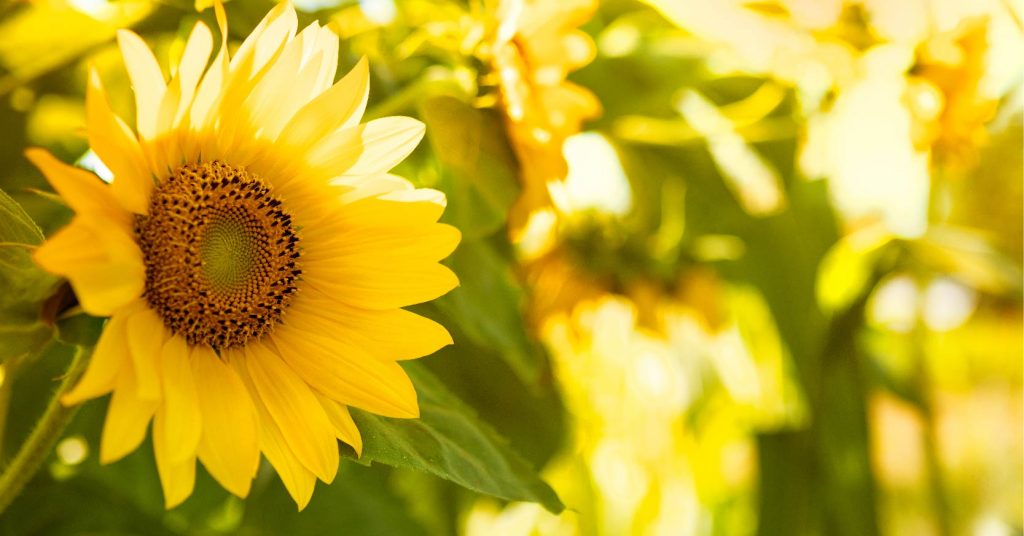 Easily recognizable by their bright yellow flowers, sunflowers have been important cultural symbols for thousands of years. This diverse group of species displays natural variation in photosynthetic efficiency in wild populations, which presents a sustainable solution for increasing crop yields. With excellent resources available for research and breeding, sunflower could serve as a model to develop more resource-efficient and high-yielding crop varieties.

Agriculture is inarguably a vital source of food, industrial products, labour, and a major component of GDP in some regions [1]. However, it also places a heavy burden on natural resources and poses a serious threat to the environment and human health through the combined effects of deforestation, biodiversity loss, fertilizer and pesticide use, and greenhouse emissions [2,3,4]. Considering the predicted pace of population growth along with the expected declines in crop production [5], there are deep concerns about sustainability and food security. For these reasons, there is a pressing need for crop varieties that can sustainably increase yields.

Science has taken up this challenge through applying technological advances in high-throughput genotyping, phenotyping, and genome sequencing that has enabled the development of more efficient strategies for crop improvement [6,7]. A key component of these breeding strategies is a high-quality reference genome to enable researchers to link variation in important traits to underlying genomic regions or haplotypes, and identify the related accessions carrying the haplotypes of interest [8,9]. Genomics-enabled breeding allows researchers to then bring agriculturally important traits, such as those related to resource efficiency, into elite cultivars.

A model for optimizing resource use already exists in the wild in the form of natural variation in photosynthetic efficiency [10,11]. Photorespiration is a process that uses energy produced by photosynthesis and releases CO2. It begins when RuBisCO acts on oxygen instead of carbon dioxide and creates toxic side-products that require a set of costly recycling reactions. Photorespiration uses up the fixed carbon and wastes energy, thus reducing CO2 assimilation efficiency and biomass yield. Hot, dry conditions may increase photorespiration unless plants have specialized means to mitigate such stress. However, most plants are C3 plants and have no special features to combat photorespiration. Conversely, C4 plants can minimize photorespiration by separating initial CO2 fixation and the Calvin cycle in space, performing these steps in different cell types. There are also species that have intermediate leaf anatomies and are characterized by their resistance to photorespiration, allowing them to operate in higher temperatures and drier environments than C3 plants.

One such group of intermediate species is the Helianthae tribe in the Asteraceae family, which comprises multiple origins of C3-C4 intermediacy and C4 photosynthesis. Thus, the genetic capacity to evolve innovations in photorespiration occurs naturally in this diverse group of species, which includes sunflower (Helianthus annuus L.), one of the world’s most important oilseed crops [1].

Extant sunflower cultivars derive from the domestication of the common sunflower (also H. annuus) ca. 4,000 years ago in what is now east-central USA [12]. It was originally grown for a wide variety of purposes, including for food, raw building materials, as well as ceremonial and medicinal applications.  Introduced in Europe as an ornamental plant by Spanish explorers in the mid-1500s, the sunflower was later grown in Russia for its oil content, where it became widely cultivated and commercially available as a crop in 1830 [13]. Ironically, these oilseed sunflowers were brought back to North America in the mid-20th century and re-introduced in its native range where it is commercially grown primarily as an oilseed crop, though it is also an important ornamental crop with its iconic flowers.

Cultivated sunflower varieties differ from those of the wild relative in several key phenotypes, including earlier flowering time, reduced branching and strong apical dominance, which results in a single flowering head [14]. Many of the wild sunflower species are cross-compatible with the cultivated sunflower and occur in extreme environments such as sand dunes and salt marshes. This phenotypic and ecological diversity is a valuable reservoir of adaptive traits in wild populations that can be potentially harnessed for crop improvement [15,16]. Furthermore, sunflower has excellent germplasm (~40k wild and cultivated accessions globally) and genomic resources, including multiple reference genome sequences, ultra-dense genetic maps, and broad sequence coverage of wild and cultivated accessions, that are available to support global breeding programs.

The European Commission Horizon 2020 funded project GAIN4CROPS is in the initial stages of developing novel technologies to overcome one of the main constraints on photosynthetic efficiency, photorespiration. NRGene is pleased to be a contributing member to this effort by applying our expertise in genome assembly to produce 11 high-quality sunflower reference genomes that will represent various stages in the C3-C4 intermediacy. The overarching goal is a set of variants implemented in sunflowers that can improve the carbon fixation rate and thereby increase photosynthetic efficiency by >40% [10]. The first step, as outlined by the GAIN4CROPS consortium [10], is to employ large-scale comparative genomics and systems biology approaches in closely-related Helianthae to identify alleles that enable C3-C4 intermediacy. Following these large genomic scans, the team will then apply genome editing based pre-breeding that mimics the initial steps in the natural evolution of C4 photosynthesis. Mimicking the naturally occurring C3-C4 carbon-pump would therefore require less complex anatomical and biochemical modifications than C4 metabolism [Fig. 1]. Following these breeding targets, the aim is to explore whether causative genomic features can be introduced by interspecific hybridization. As noted, sunflower is cross-compatible with many wild relatives, allowing a natural means for the introgression of natural or innovative traits into elite cultivars [17]. At NRGene, we make discoveries in diverse biological systems, from wild understudied species to model systems for evolution such as the sunflowers. On a personal note, having devoted the past 15 years of my career to the study of sunflower evolution and the development of resources for the sunflower community [18,19], this Horizon 2020 project represents a unique union of my previous research with broad expertise from public and private partners to address the very important issues of sustainability and climate change.

11This project received funding from the European Commission’s Horizon 2020 research and innovation programme under Grant Agreement 862087.

Previous Blog:
REFLECTIONS ON THE IMPORTANCE Next Blog:
TEACH A MAN TO
Back to blog