Gregor Mendel – A genius far ahead of his time 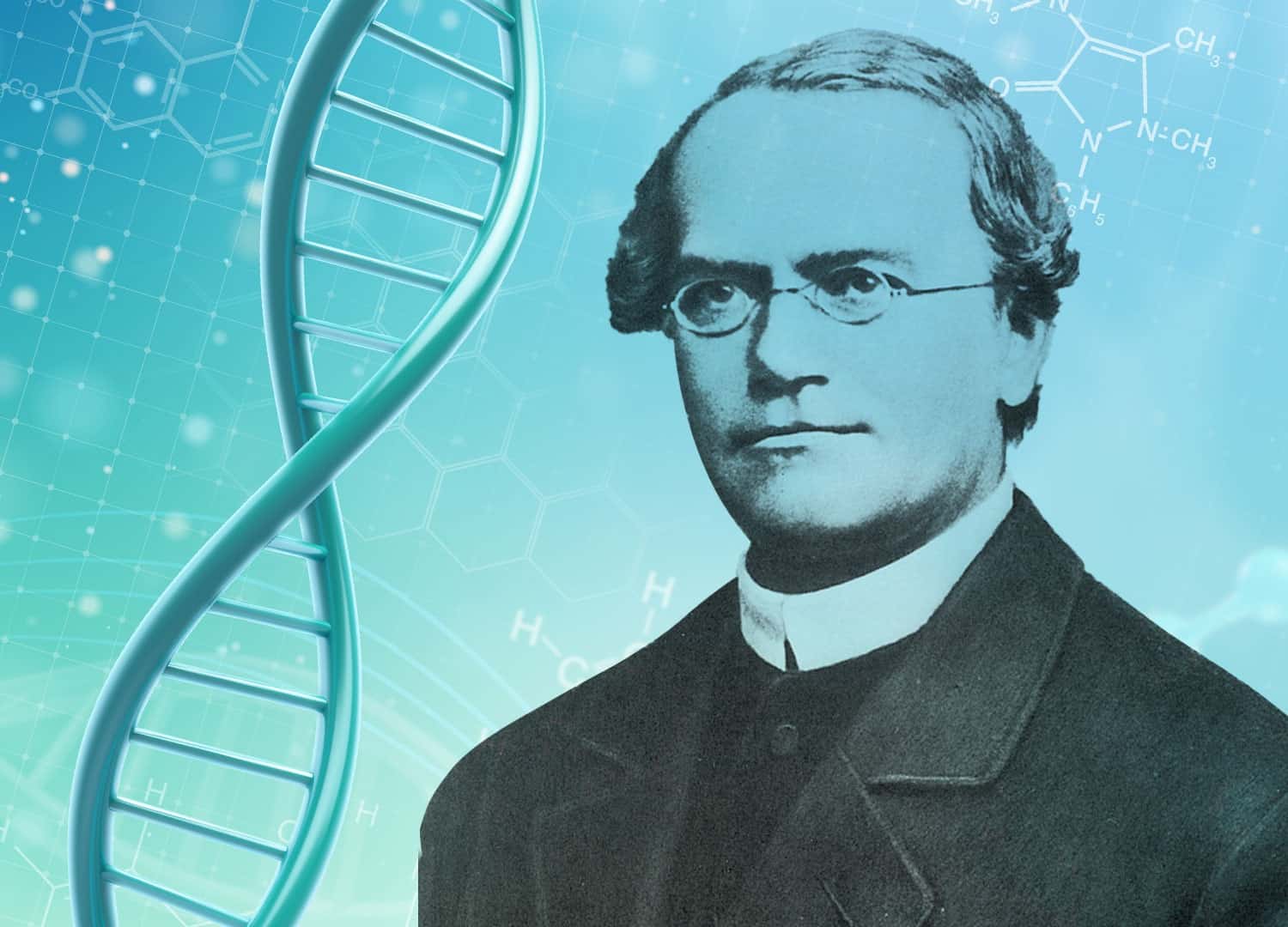 “The laws governing inheritance are quite unknown; no one can say why the same peculiarity in different individuals of the same species, and in individuals of different species, is sometimes inherited and sometimes not so; why the child often reverts in certain characters to its grandfather or grandmother or other much more remote ancestor.”
Charles Darwin – On the Origin of Species

Who was Gregor Mendel and why remember the 200th anniversary of his birth all these years later? What innovations did this simple monk make while living in remote isolation in a European monastery? What contributions did he make that redefined the way we look at the world today? Were his scientific discoveries completely novel and before his time, or were such scientific discoveries inevitable?

Gregor Mendel was born in the summer of 1822 in a remote village called Hinzdorf in Moravia – then part of the Austrian Empire – that today sits in the present Czech Republic. Originally born as John Mendel, he was always a curious and clever little boy who questioned everything in front of him. It was this curiosity that eventually led him to the love of gardening and the natural world. As a young adult he began his studies at a small village convent long before the advent of public education in rural areas. Upon graduating he then continued his studies at a two-year university program in which he deepened his interest in both physics and mathematics. These studies later laid the foundation for the statistical research and analyses on which he would base his scientific theories.

From the outside, it seemed like Mendel hit the academic lottery and there was nothing to stop him from succeeding. However, the truth of the matter is much different as Mendel’s impoverished background did not set him up to achieve scientific prowess. His parents were meager farmers fully occupied with intensive labor and they did not have any previous education to help Mendel. To be accepted into an elite academic institution without credentials or finances, Mendel had to begin his studies as a monk (which he did in 1843) and eventually become a dignified member of the Augustine Order. By entering the strict religious sect, he managed to cover the substantial expenses of his advanced studies. Mendel stopped his education all together several times due to depression and personal crises, but nevertheless still managed to finish a three-year curriculum in four years despite these major setbacks.

Upon graduating from the convent, Mendel was posted to a small community outside of Brno where he worked for a time under stressful conditions that eventually led to him becoming gravely ill. Due to his illness and other personal issues, the papal order transferred him to a lighter teaching position. However, he was far from an ideal professor as he failed his teaching exams twice.  In 1851 he was sent to study at the University of Vienna where he completed his scientific education in 1853, a true testament to his persistence and determination.

Despite these trials and tribulations, the pious monk Gregor Mendel began lecturing at the Austrian Order in Brno at the age of 31. It was here that he undertook a series of experiments involving sweet peas and their colored flowers that changed the scientific world forever. His findings and hypotheses eventually became the foundation of inherited genetic theory within the broader scientific community.

Instead of focusing on a variety of specimens, as was common practice in those days, Mendel instead decided to focus on a single species: Pisum Sativum, commonly known as the garden pea. Using a narrow model group of only one species allowed him to examine the subtle differences within Pisum Sativum itself, instead of focusing on a larger more diverse group of plants with a wider array of differences.  Mendel’s hypothesis about inheritance was based on this single species, to which he owes his groundbreaking discovery.

Mendel’s system of experimentation was exceptionally well-built even by today’s standards. He spent almost a decade adjusting different variables in which he planted thousands of specimens, tested hundreds of thousands of seeds, and analyzed the colors of thousands of flowers. All of these experiments and results were meticulously summarized and the statistical analysis that Mendel performed represents a breakthrough in the understanding of the diverse distribution of traits found in all living organisms.

Mendel presented the results of his research in a scientific journal that was later published. He then continued to lecture from his monastery and at two separate seminars about his findings and their significance on scientific and biological research.

And then… nothing happened.

Mendel’s findings did not receive much attention within the scientific community during his lifetime and his contemporaries did not recognize his genius.  He was forced to abandon his scientific methodologies and experimentation in order to run the Augustine Order in Brno where he lectured and taught for 14 years. Towards the end of his life, he immersed himself in the bureaucratic affairs of running the order, until his untimely death in 1884 at the age of 61 as a result of kidney disease

So what’s all the fuss about? All in all, this is a tragic story if we look past the scientific advancements he made in genetic theory. We should acknowledge the great life of a novel scientist with all its ups and downs, instead of just the conclusion and the sum of all its parts. Let’s celebrate the 160 years of Mendel’s publication, the 120 years of Mendel’s research discovery, but also recognize the birth of someone who was only but a footnote during his own lifetime. Where would our society be had this discovery never taken place, or perhaps made at a much later date by someone else? The truth is that our modern world owes Gregory Mendel an enormous debt of gratitude.

The significance of his findings and influences

Although Mendel was underappreciated during his own time, without his research and discoveries mankind today would not be making progress in biological research at such a dizzying pace as compared to other fields.
His findings were so simplistic and accessible to the reading public that one did not need to be a member of the elite or educated classes to understand the legitimacy of his teachings. The laws he hypothesized were subject to very simple truths visible to the naked eye, and his experiments were so rudimentary and simplistic that they could be reconfigured and performed anywhere else in the world.
The laws he set were universal and pertain to all living creatures, both plant and animal. The use of Mandel’s laws of inheritance is now fundamental in all fields of study dealing with the cultivation (especially breeding) of plants and animals.

Could anyone else have achieved what Gregor Mendel did?

Mendel was nearly a contemporary of Charles Darwin, as he was born 13 years after Darwin and died two years after Darwin’s. Darwin, who was famous for his theories on species origin and mode of inheritance, objected to Mendel’s type of study based on a single model organism. Darwin advocated for a method in which the experimental system should be as close to natural conditions as possible to allow all natural selection processes to influence the experiment. Although there are alleged accounts that Darwin met with Mendel once to discuss their findings, and even those who do not believe that such a meeting took place, all agree that Mendel’s research was known to Darwin at the time of his discoveries.

It could very well be that the discovery of Mendel’s laws was just a matter of sheer luck, especially as we look to Darwin’s words in his own book On the Origin of Species. No one can say for certain why similar hypotheses were proposed by two different men in slightly different detail. Darwin’s book was presented in 1859 and was widely disseminated and recognized by the scientific community. Mendel only later published his research in 1865, but one can speculate that his findings could very well have been much more famous if Darwin had accepted and shared Mendel’s own work.

What did I personally learn from Mendel?

Mendel is an outstanding example of  “austerity” in a simple farmer, a monk of the Augustinian order, and a plant researcher. He decided not to write a book about his findings but rather to engage in the politics of the church and participated in efforts to collect taxes from its constituents. He lived a simple and pious life and put the common good before everything else, including his research. Mendel was an incredibly humble man who did not tout his efforts and discoveries in a way that some believe he should have. In his research, he showed punctual determination and dedication to scientific details that were uncharacteristic for the age in which he lived. Mendel had a knack for explaining complicated conundrums such as “why does my mother have green eyes and I do not?”.  Without the works of Gregor Mendel, these questions would largely have remained a mystery.

Forrest Jackson. A Sales Development Representative; Forrest has an educational background in Political Science and an extensive work history in farming and agricultural technology. Originally from Oregon’s Willamette Valley (accurately nicknamed the grass seed capitol of the world), Forrest spent his summers on a harvest crew and quickly developed a love and appreciation for gardening and biological diversity. Passionate about the world of agricultural innovation Forrest has found himself here with us at NRGene helping the company to generate and communicate with future partners from around the globe.

Aharon Rubin is part of the breeding team and serves as a breeder assistant. He is towards the end of his bachelor's degree in agroecology and plant health at the Hebrew University of Jerusalem. He is interested in entomology and plant diseases and strives to help the agricultural profession become more sustainable.

Previous Blog:
A GENE-EDITING PREDICTION ENGINE
Back to blog