THE STORY OF POTATOES – WHY DOES GENETIC DIVERSITY MATTER? 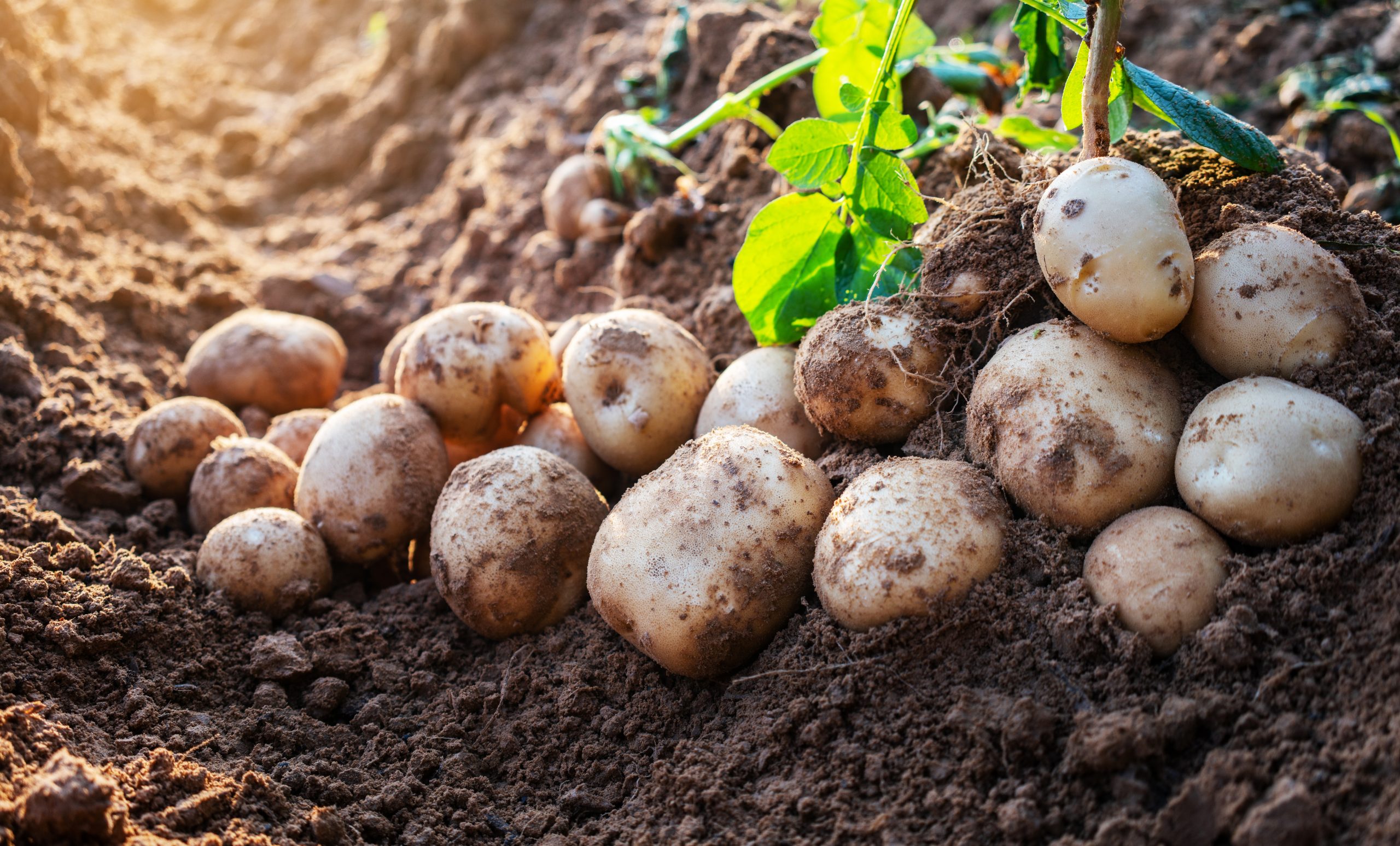 The Potato: It is reliable, easy to grow, and a nutritional giant. The potato is endlessly adaptable and has been a staple of diets for centuries. Potatoes are the fourth-most important crop in the world, after rice, wheat, and maize.

The potato is easy to take for granted. It is an easy cultivator and has a stable shelf life, providing a year-round food source. The very reliability of the tuber can lull growers and consumers into complacency. When a crop is planted as a “set it and forget it”, it is easy to assume that it will flourish every year just as it has in the past. Through the test of time, one thing has rung true: genetic diversity is critical to the safety and stability of every crop, including the potato. Without genetic diversity, our food supply is in grave jeopardy. The Irish Potato famine is a stark example of the extreme consequence that can result from lacking diversity of organisms.

To understand how the potato changed the world we must look back to the 1492 Columbus Expeditions. Prior to 1492, the world was geographically segregated and the distinct continents of North and South America had yet to be discovered by European explorers. Following the 1492 Columbus voyage, this dynamic changed irrevocably. “A New World” was discovered in the eyes of the Europeans, igniting a race for the discovery of resources and colonial territories. These discoveries resulted in new modes of exchange pathways which consequently, allowed for large scale transference of people, plants, animals, natural resources, technology, ideas, culture, and diseases across continents.

At the same time of these discoveries, Europe was plagued by famine resulting in civil strife and unrest. Crop failures were common, especially in the unpredictable climate of Northern Europe which provided the continent with supplies of cereal grains. Food security is a key component for global superpowers, something Europe lacked in the Middle Ages. Food insecurity defined Europe through the Middle Ages.

In the Americas the indigenous peoples settled and stewarded the land with exceptionally different perspectives and practices. The indigenous communities went to great lengths to prioritize plant diversity and to work in harmony with nature. Native plants, previously unknown to European explorers, such as maize, cacao, tobacco, squash, beans, tomatoes, peppers, and the potato, were all widely cultivated to sustain their indigenous populations. These communities regularly experimented with plant species with intention to create adaptable varieties. An impressive achievement was the diversification and improvement of the Andean potato. The wild potato contained toxic alkaloid properties that were poisonous and was unfit for human consumption. After deliberate breeding, the potato was transformed into a dependable staple crop.

Edibility wasn’t the only change Native Americans made to the potato tuber; unique cultivars and varieties were developed throughout the Andes to adapt to geography, climate, and soil conditions. Native Americans enabled plant diversity to expedite nature’s evolutionary process to their favor. The potato proved to be adaptable to a range of geographic and environmental factors. Indigenous peoples used biology to their advantage and consequently, their civilizations thrived even in times of environmental stress. It is safe to say that Native Americans had a far greater understanding of plant sciences, natural biology, and basic inherited genetic properties than their European counterparts of the time.

As Europe settled the Americas, the cross-continental trade of goods began. From a food development perspective, Europe benefited from the breeding advancements of the Indigenous populations. When explorers returned to Europe, they brought novel cultivars as tokens of exploratory successes. Following, potatoes became widely utilized by the working classes as a staple for daily sustenance. As the potato became more established, Northern Europe largely benefitted from the adaptation to unpredictable climate and poor soil conditions. Previously unworkable land became viable for growing potatoes, resulting in a sudden population explosion of the working class.

The diet of the Irish peasantry consisted mainly of potatoes and buttermilk, the average Irishman consuming up to 14 pounds a day. The potato was a vital source of carbohydrates that contained essential vitamins and minerals. In less than 100 years the population of Ireland more than doubled. Northern Europe’s population began to swell, creating a sturdy and deployable working class. This stark increase in able bodied workers in Northern Europe directly affected the onset of the Industrial Revolution. The potato changed Northern Europe in a short period of time. However, exuberant growth that was dependent on a single food staple and variety proved to be a dangerous endeavor.

In 1844 a novel pathogen (Phytophthora Infestans) arrived in Europe, steadily spread across the Northern region. Monoculture and international trade allowed what is commonly known as potato blight to proliferate, unchecked. Farmers across the continent began to see their crops turn to black slime when exposed to the air. A rotten stench that accompanied the blight was to be a foreshadowing of what was in store. European farmers prioritized production over genetic diversity. Unlike their native American counterparts, the Irish over-reliance on a single variety was tracking towards devastation.

As Ireland descended into famine, an unsympathetic Britain established trade barriers that promoted food exports to Britain. Cereal crops and other food imports were sparce and costly, making them unavailable to the lower class. Poverty and famine resulted in the disappearance of families and villages. The Great Hunger decimated the Irish population losing an astounding 25% of its citizenry in a single decade.

What lessons can we take from the Irish Potato famine as microbiologists, geneticists, or even horticultural enthusiasts?

Potato blight took a devastating hold on the Irish population and their economy because the crop was at a unique risk due to the high dependence and proliferation of single species of tuber. Tenant farmers had not given thought to the risks of potato monoculture. When the blight took hold in Europe, the pathogen spread from host to host uninhibited, leaving no potato crop untouched. With each potato tuber being genetically identical to its neighbor, the blight essentially had no obstacle, and its devastation was swift and harsh. Ireland’s robust potato monoculture proved be its own Achilles heel, but its full effects were only realized when it was too late.

The indigenous Andean farmers had toiled long and hard to provide new potato varieties and sub-cultivars, which left them with strength and resilient crops. These Andean farmers may have been aware of many diseases long before their arrival.

The importance of genetic diversity and biodiversity cannot be overstated. Genetic variety of any organism adds a natural barrier protecting itself as a species against the overwhelming odds of communicable disease. If Northern Europe had placed importance on the diversity of their cultivated potato crops rather than yield and output, the Great Hunger/Irish Potato Famine may have been avoided. Their Native Americans were far ahead of their time with knowledge of plant diversity, bio-engineering, and selective breeding.

Forrest Jackson. A Sales Development Representative; Forrest has an educational background in Political Science and an extensive work history in farming and agricultural technology. Originally from Oregon’s Willamette Valley (accurately nicknamed the grass seed capitol of the world), Forrest spent his summers on a harvest crew and quickly developed a love and appreciation for gardening and biological diversity. Passionate about the world of agricultural innovation Forrest has found himself here with us at NRGene helping the company to generate and communicate with future partners from around the globe.

Previous Blog:
GREGOR MENDEL - A
Back to blog